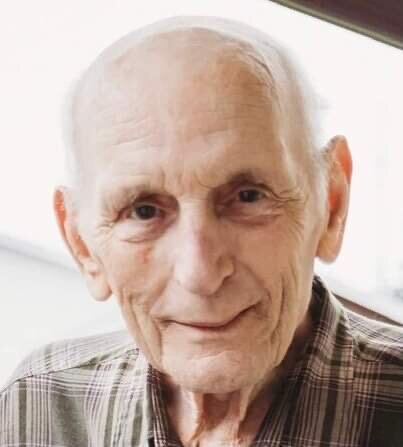 Please share a memory of Edouard to include in a keepsake book for family and friends.
View Tribute Book

KONTSCHIEDER, Eduard - Of Wawa passed away peacefully at the Lady Dunn Health Centre on Monday May 23, 2022 at the age of 92 with his loving daughter Elizabeth by his side. He is now reunited with his cherished wife, Ann. He is predeceased by his parents Anna (nee Rottensteiner) and Alois Kontschieder, his brothers Johann (late Johanna) and Gottfried (Gretel), and his sisters Marianne and Erika (late Willy). He will be fondly remembered by his siblings Hubert (late Julie), Veronika Vock (Karl), Alois (Paula), Elisabeth Hoffman (Franz), Walter (Maryanne), and Anni Schulz (Wolfgang) and as well as, by his many nieces and nephews in and around Salzburg, Austria and Dumfries, Scotland. He will be greatly missed by his special goddaughter, Cheryl Fellinger of Sault Ste. Marie, Ontario.

Eddie was born in South Tyrol - Merano, Italy on December 21, 1929. When he was ten years of age, his family moved to Elixhausen, near Salzburg, Austria. In 1951 he decided to emigrate to Canada and set sail from Hamburg, Germany to Halifax, Nova Scotia. From there a train took him halfway across the country to his destination point of Sault Ste. Marie, Ontario. After working a few jobs, including one with the ACR, he learned of an opportunity at a mine in Wawa. When he would recount the story, he would quickly admit it was not actually working in the mine, but rather the bunkhouse accommodations and excellent cookery that enticed him. He retired from Algoma Ore Division after 30+ years of service. In retirement he remained active by distance walking year round, adding cycling and swimming in the summer. He was determined to stay fit, so he could collect his pension for at least as long as he had worked - a goal he was proud to have achieved. He lived a long, contented life. He will live on in the memories of many.

A memorial mass will take place at St. Monica's Church, Wawa on Saturday, June 4, 2022 at 1:00 p.m. with Reverend Michael Asorgoe officiating. Cremation has taken place at River’s Edge Cremation Centre, Sault Ste. Marie. His ashes will be interred in the Woodland Cemetery, Wawa. Memorial donations in memory of Eddie may be made to the Lady Dunn Health Centre Foundation would be appreciated. (Arrangements entrusted to the Kerry Funeral Home Ltd., Wawa, 705-856-7340). www.kerryfuneralhome.ca

Share Your Memory of
Edouard
Upload Your Memory View All Memories
Be the first to upload a memory!
Share A Memory
Plant a Tree