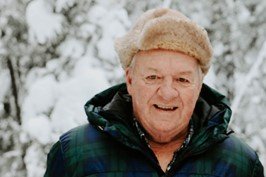 Please share a memory of David to include in a keepsake book for family and friends.
View Tribute Book
SEGUIN, David Ovila (April 7, 1953 - May 1, 2021) David passed away suddenly at one of his favourite places, the trap camp, with his beloved wife at his side. David was predeceased by his parents Ovila (Bill) and Phyllis Seguin, his father-in-law Alfred Dampier, and his brother-in-law Jim Gannon. He is survived by his wife of 47 years, Louise and their two children Liisa (Joel) Brolund and Tuffy (Roxanne Holmes) Seguin. David left behind 2 granddaughters who were the apples of his eyes and the delight of his life, Quinn Brolund and Everly Seguin. David is also survived by his siblings Raymond (Michelle) Seguin, Maria (Roy) Bell, Patricia Hardy, Louise (Tom) Douglas, Jo Anne Neitzschmann and Janie Seguin; his siblings-in-law Gordon (Margaret) Dampier, Sandra Gannon, and Cathy (Bino) Ray. Also surviving is his mother-in-law K.M. (Cookie) Dampier. He will be fondly remembered as Uncle David to several nieces, nephews, great-nieces, and great-nephews. David will also be remembered by his many friends he has made over the years. David was an avid outdoorsman who loved to spend his time in the bush hunting, fishing, and trapping. He instilled his love of the outdoors into his family, and they have many happy memories of boating and adventuring on Lake Superior in Nipigon Bay, at the Slate Islands, and at the camp he and Louise built (with help from Gramps) on Michipicoten Island. In his younger years, growing up in Red Rock and while attending Lakehead University, David played hockey and he remained an active part of the hockey community for many many years as a minor hockey coach, referee, and Old Timer player. He coached many kids in Long Lac and White River in the 1980s and 1990s. He was also a Hunter Safety instructor for many years. David was active on many community committees over the years and was always happy to share his knowledge of the outdoors and the local area with the people he worked with on these committees. More recently David enjoyed having virtual visits with his granddaughters and he was always looking forward to the next time he could hug them and visit in person. At David’s request cremation has taken place and there will be no funeral services. If friends so desire, donations can be made to a Minor Hockey Association of their choice. (Arrangements entrusted to Kerry Funeral Home Ltd. Wawa, Ontario 705-856-7340)
To plant a beautiful memorial tree in memory of David Seguin, please visit our Tree Store

A Memorial Tree was planted for David
We are deeply sorry for your loss ~ the staff at Kerry Funeral Home Ltd.
Join in honoring their life - plant a memorial tree
Online Memory & Photo Sharing Event
Online Event
About this Event

Look inside to read what others have shared
Family and friends are coming together online to create a special keepsake. Every memory left on the online obituary will be automatically included in this book.
View Tribute Book
Services for David Seguin
There are no events scheduled. You can still show your support by planting a tree in memory of David Seguin.
Plant a tree in memory of David

Share Your Memory of
David
Upload Your Memory View All Memories
Be the first to upload a memory!
Share A Memory
Plant a Tree