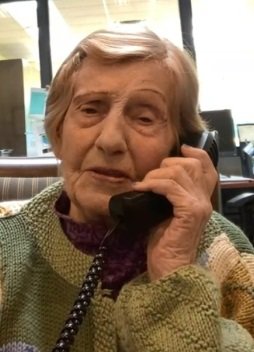 HAWKINS, Margaretha "Edith" - Passed away unexpectedly at the Bignucolo Residence on Friday July 3rd, 2020 at the age of 96 years. Beloved wife of the late Murray Hawkins. Loving mother of Janice Tremblay (Al) and Paul Hawkins (Randi). Proud grandmother of Trevor Jason "TJ" (Jennifer), Citabria "Bria" (James) and great grandmother of Preslay, Brayden, Kayley and Sadie. Dear daughter of the late William and Jeannette Honing. Dear sister of Wim Honing of British Columbia, and predeceased by her two sisters Jenny Ralph of Toronto and Netty Vandyke of Calgary. Edith was born in Rotterdam, Holland. Early in life, she chose a career in nursing and soon after, experienced hardship with the German occupation of her country during World War II. After the war was over, she found herself working on hospital ships carrying soldiers infected with tuberculosis home. She came to Canada in the late 1950’s and nursed in Alberta. When her father was dying of cancer in Ontario, she came over to nurse him until he passed. While in Huntsville, she and several other nurses went to a Christmas party with some Rangers that were attending forestry training in Dorset. Apparently only one of these Rangers (Murray Hawkins) had a vehicle, so he had to pick up those “darn nurses” and drive them home. Well, Murray ended up marrying one of these “darn nurses” Edith Honing, in April of 1958. They moved to Chapleau where they had two children and made Chapleau their lifetime home. A private family funeral service will be held on Thursday July 9, 2020. Interment at the Chapleau Municipal Cemetery. Memorial donations made to the Chapleau General Hospital Foundation-Activation Department would be greatly appreciated by the family. (Arrangements entrusted to Kerry Funeral Home Ltd., Wawa, 1-800-439-4937). www.kerryfuneralhome.ca
To plant a beautiful memorial tree in memory of Margaretha Hawkins, please visit our Tree Store

Share Your Memory of
Margaretha
Upload Your Memory View All Memories
Be the first to upload a memory!
Share A Memory
Plant a Tree