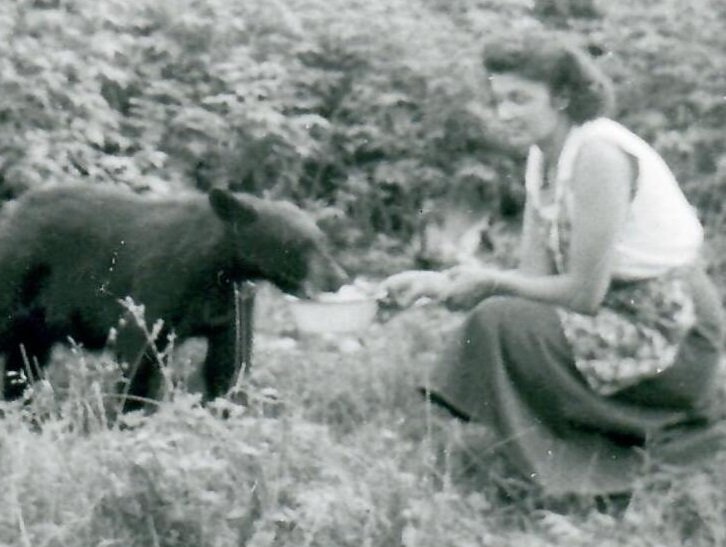 McAULEY, Nellie “Toy” – Passed away peacefully at the Bignucolo Residence on Monday, October 28, 2019 at the age of 97 years.  Nellie is now reunited with her long-time partner the late Mel Gregson.  Cherished mother of Ken McAuley, Robert McAuley (Lison) and David McAuley.  Loving grandmother of Terri-Ann, Debra, Lisa, Michael, Michelle, Brayden and Connor.  Nellie was predeceased by her brothers the late Archie Green (late Chris) and the late Kenneth Green.  Nellie will be remembered by her niece Cynthia and her nephews Donald and the late J.L.  Toy will be remembered as a woman who loved the wilderness.  In her younger years she ventured on numerous canoe adventures, many as far as Moosonee; she continued her canoe trips well into her late 80’s but those were mainly for the purpose of maintaining her active trap lines and for the pleasure of fishing and connecting with nature.  Toy was also well known for her passion for cooking; throughout the years she fed an abundance of hungry men at the mining camps and later became a well-known cook at the Chapleau Moose Hall.  Most important was Toy’s love for animals, especially dogs; she was known to always have a few dogs by her side who kept her well protected, especially during all of her adventures.  Overall, Toy was a strong independent woman with a warm kind heart who was known to be a straight shooter, never short of colourful language.  Unfortunately Toys adventures came to an end after suffering a stroke in her late 80’s.  At which time her new home was at the Chapleau Hospital Activation Long Term Care.  Although, she could not return home to pursue her passions, Toy was fortunate to be surround by kind and caring nurses and staff who took very good care of her up to her final day with us.  Toy is now taking a new adventure and may it be with endless freedom and peace.  A Celebration of Life will be held at the Turtle Lodge, Fox Lake on Friday November 1, 2019 at 10:00 a.m.  Cremation has taken place at the River’s Edge Cremation Centre, Sault Ste. Marie.  Memorial donations made to the Humane Society would be greatly appreciated by the family.  (Arrangements entrusted to the Kerry Funeral Home, Wawa, ON, 1-800-439-4937).  www.kerryfuneralhome.ca

Share Your Memory of
Nellie
Upload Your Memory View All Memories
Be the first to upload a memory!
Share A Memory
Plant a Tree